We bought a greenhouse! It was one of those, “I’ve always wanted a greenhouse”…. Followed by a “hey look, this one is for sale”…. Then some googling alternatives, and picking one. 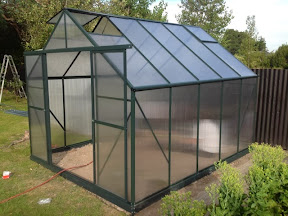 It’s awesome. However, I have noted that the internet is limited about advice on actually greenhouse gardening, so I will be making a series based on our experiences, and hopefully helping others to learn from where we went right and wrong….

To start we picked a polycarbonate greenhouse. These are basically like a super strong, UV treated, plastic paneled greenhouse. We have dogs and high winds… So the idea of glass or a plastic tunnel house was out right away. This one is concreted into the ground using the 6 feet on the structure… It is also about 2 1/2m wide and 3m long… So it’s pretty big. 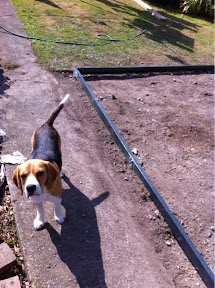 Then assembling the damn thing… My husband described it as a divorce inducing process. The instructions were….. Lacking. So I ended up in tears, the husband frustrated, the mother and father both called in, and eventually, a greenhouse set up. 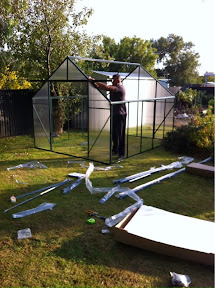 Then I decided we would grow things in slightly raised beds inside the greenhouse. I build a 6×2 raised edge, bolted together, (like my tutorial on building a small raised bed). This was filled with mushroom compost, though any compost will do. This means that we get the benefit of planting in the ground from worms, water etc, as well as the benefit of increased temperature by raising it off the ground within the greenhouse.

I also put in a pathway… Mainly to be pretty…. 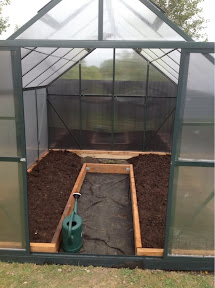 So far we have planted a tamarillo tree which we hope will fruit… And some lettuce and watermelon. Mainly, as it is summer, and it’s too hot in there to grow many things. Everything I have read indicates that summer is the time to replace compost, to clean the greenhouse, and to prepare for autumn plantings. We however want to get something going, so we are trying subtropicals. I will be buying taro and a banana plant to attempt that. I am a huge believer in companion planting, so I’ll be carrying that on in here. So far I have marigolds to keep out bad bugs, and lobelia and alyssum to attract the bees. 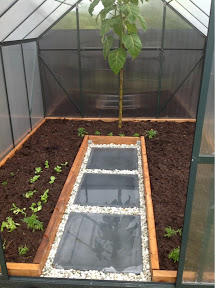 The greenhouse still needs a lot of water at this point, mainly because the compost is still decomposing into soil, and the ground below the greenhouse was super dry when we erected the structure.

Hopefully I’ll have another update soon on how we are reworking it to our needs.