I’m not usually one to share my political opinions on the interwebs, and well, I’m not going to do it now. Not really. But, I am in support of the Women’s March on Washington, as well as the sister marches, including the one here today in Wellington, New Zealand.

The thing I think is completely important to all women is access to healthcare, and any government looking at defunding an institute such as Planned Parenthood needs a rethink.

In the last 24 months, I have been in and out of hospitals (I got up to 5 different places, private and public for scans and operations). I’m fortunate to be in New Zealand where my healthcare was free, and the medical staff treated me and my views with respect. I have had Endometriosis removed (documented as being the worst the surgeons ever saw), a tumour, colon resection, and 2 IUD’s… amongst other things. I had the blessing of people willing to work hard, the last operation was over 10 hours, which I expected to walk out with a hysterectomy and a colostomy bag – but due to very elevate surgeons, I kept my non-functional uterus and walked out without the bag. It has been a long run, and I know how lucky I am.

But every woman should be.

My husband was treated with massive respect when he had his cancer removed, and during chemo, and during his stay in the high dependency unit due to his reaction to chemo.

And I got the same respect.

So should the other women worldwide, regardless of what their personal views or agendas are. Transwomen deserve respect and healthcare. Trans-men deserve the same, especially with a need for cervical smear tests. People are people, and love is love. Respect and dignity should be for all, regardless of race, creed, religion, age, or social status.

So I made a pussyhat in solidarity – and a brooch. 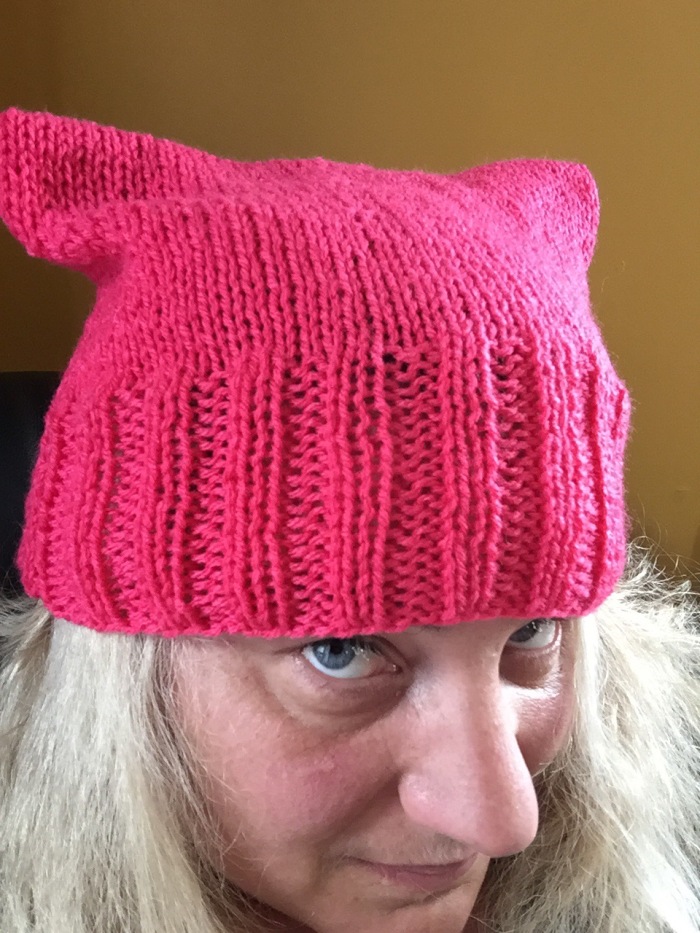 Tiny #spider #knittingpattern is out. 🕷🕸