For better or for worse, I’m still vegan. I don’t think I’m going back.

It’s not always easy, and I find myself having to say, “I’m vegan” more often than I expected. Those who judged being vegetarian also judge veganism. And I work with a lot of these people. It’s a shame that I like brown lentils… as clearly these are not popular with the masses 😫

But I’m not quite fully vegan. I don’t have a problem with ethically produced honey. And I don’t have a problem with ethically produced wool. It’s been a few weeks of soul searching, but I think I’m still in favour of wool from ethical farms, and local producers. I don’t usually use mass produced wool, so that’s an easy transition. If I can source good non-animal fibres in a range of colours, I’ll go knit-vegan also. But for now, I still need to knit, and when producing for others, I’m still happy with wool.

My cravings have changed…. I tend to crave hummus and strawberries now when I want something.

At this stage I’ve been eating either meals that I cooked as a vegetarian that happened to be vegan… or foods prepared by others as vegan. I need to start cooking new recipes that are vegan.

I so love living in a town with a farmers market. This was this mornings haul: 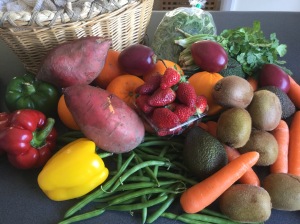 The husband and dogs are still carnivores 😂

It’s been a while... between a freak accident that threatened my sight and other health issues, #knitting and #pattern design became less of a priority.... as my focus was on treading water. But things seem steady for the moment (and I can see!). Working on a @woolandthegang #cable #blanket and it’s very snuggly and warm.